With my Follower total resetting to zero when it hit 70 million, there’s no debating @SWManor is the most popular Twitter account that (sometimes) includes wrestling-related posts.  Consequently, I am constantly flooded with genius-level opinions regarding the King Of Sports.  This time out I will examine the most common of those incredibly astute communications.

“RAW and Smackdown are in huge financial trouble.  Look at this picture of all the empty seats in the arena the telecast is coming from tonight.”

Always trust “empty seat” photos posted online, even though the person taking the picture fails to mention it was shot an hour before the show started.  The billion-dollar WWE with two major television outlets currently bidding hundreds of millions for their broadcast rights is in dire financial condition!  I’m selling all my WWE stock right this minute!!!

“Chris Benoit should go in the Hall Of Fame.  After all, it’s been ten years and he was never convicted of any crime.”

Right you are, MENSA member.  Let’s take it a step further and also add Adolph Hitler to the Celebrity Wing.  It’s been over seventy years and the Fuhrer never stood trial or was even arrested!

Quite a shame Chuckling Charlie Manson croaked.  His induction speech for ol’ Adolph would have totally ruled, dude.

“So awesome seeing all the guys in Bullet Club shirts on WWE TV.”

Yes, these rugged individualists all dressed alike are really sticking it to the WWE by buying those $250 ringside seats then going home to watch good wrestling on the Network.  Right on, brother.  Fight the power!

“Now that Dixie Carter is gone, I’m going to give Impact another chance.”

Wow, that is so incredibly kind of you.  The promotion you sneered at for the past ten years while claiming to never watch it—yet being familiar with Bobby Roode, EC3, Eric Young, the Broken gimmick, etc the moment they arrived in NXT/WWE—is going to be blessed with your impartial eyes analyzing the product.  I’m immediately going to phone Scott D’Amore to ensure he sends you a “Thank You” card along with one addressed to your mother, for bringing you into this world.

(Your biological father will get one, too—if he’s ever identified.)

I’ll say you are, buddy!  Don’t be so humble.  You are among the biggest “heel fans” in all of wrestling.*

Can you believe some snowflake SJW buzzkills think that buying a ticket means you are a spectator and not a participant in an event?  Losers.  But, anyway….

The way perfectly chiseled Hercules-lookalike you called that person actually in the business “a fat pig”…I-I-I am nearly at a loss for words, so awestruck by the profundity, originality and jaw-dropping cleverness of your material (…even if it bore no resemblance to something anyone who grasped heeling would say or do.)

And, oh my word, the way you yelled “You slut” at a woman you know nothing about—which, come to think of it, is exactly how much you know about any woman—is pure gold.

But why limit it to shouting from a crowd several feet away?  I say take the next step: wait for a female wrestler in the parking lot, get face-to-face with her while she’s with some of the male wrestlers or her husband, and go “Hey, whore, blow me.”  I can absolutely promise you’ll get an enthusiastic pat on the back and be declared KING of all “heel fans.”*

[*presuming “heel fans” is synonymous with “assholes”…which it is.]

You know it, baby.  Even though you don’t know minor details like the lineup or if you’ll in fact be able to watch it if not in attendance, it’s going to be lit (since it’s indoors and at night.)  Imagine that—shooting to fill a 10,000-seat venue.  From what I understand, that’s never been done before by any promotion ever. Too sweet me, bro!!! 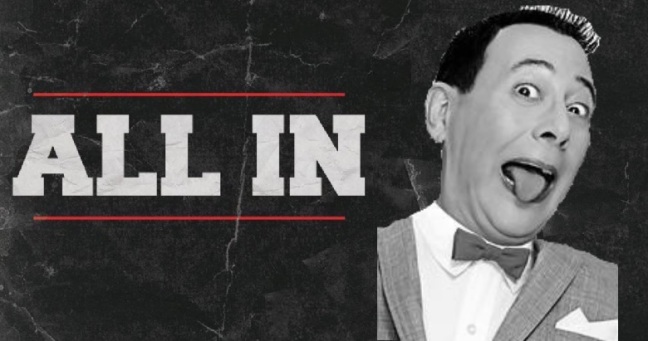 Yep.  Wrestling promotions are like social clubs.  Much like you decide to choose a AAA membership for safe motoring, a grappler picks out a promotion, then “joins” NJPW, Progress, Chikara Pro, Impact Wrestling, ICW, Ring Of Honor or whatever else tickles his fancy at the moment.  Any contract he has inked with his current employer can be casually torn up.  It’s only a piece of paper, right?

As TV has taught us, two people sign documents, one turns over the table, then a pull-apart brawl ensues.  Clearly, contracts are just for show and aren’t legally binding or anything.

Also, once a wrestler “joins” another league, he’s instantly installed in a top-tier program to illustrate he’s “more appreciated” than in the past.  This happens every single time, explaining why Samoa Joe and Sami Zayn immediately main-evented on the WWE main roster upon leaving ROH, and have each held multiple WWE titles.

“I hate it how he’s being shoved down our throats.”

I know, right?  Every Monday night, here he is being featured for like twenty minutes per episode, doing basically the same thing, since he got his singles push.  Never puts anyone over unless it’s a total fluke or distraction finish.  His “technical ability” is a joke, having maybe five moves.  And how many times do we have to watch him face Brock Lesnar?

It was sooooo unfair of the WWE to cut the historic pioneer of the groundbreaking Women’s Revolution, what with the eardrum-shattering reception Emma was getting upon every entrance and the remarkable way she pulled off the Emmalina makeover.  And who among us does not have a DVR stuffed with her breathtaking matches in NXT and the WWE?  In all honesty, I can’t decide whether the martyred master technician should be called “the modern-day Manami” or “the female Thesz”.

Here’s hoping you enjoy the event.  No doubt Tenille will steal the show.  Especially if it’s held in a Walmart.

“We know that everyone hates Roman Reigns.”

Blanket statements with nothing to back them up are very insightful and highly encouraged.  Opinions, facts—pfffft, the same thing.

And by all means use “we,” since you personally are the spokesperson for every single fan across the globe.  Additionally, even though you are the only person manning it, you should use plurals such as “we” and “us” on your site/account to create the illusion you have friends. Not the Facebook kind; but rather people who wouldn’t be embarrassed to be seen in public with you (if you can imagine that.)

Also, feel free to constantly refer to “our sources.” It’s a lot easier than typing “something Dave Meltzer or PWInsider posted and I’m just copying so it looks like I get info from someone inside even though the closest I’ve ever come to the industry is once seeing Mikey from the Spirit Squad pulling out of a KFC lot.”

Utter brilliance.  I am certain that, after every PPV and TV broadcast, Vince’s immediate priority is to check his Twitter feed and take fastidious notes regarding what wrestling fans want.  The following morning, he has a meeting with his entire staff, outlining demands made by @smark4life et al, and ordering them to be implemented at once.  That evening, Vince goes through the timelines of each of his two million Followers, hoping the changes met with their approval.

“Ronda Rousey doesn’t deserve to just walk in and get on Wrestlemania.”

Yeah, look at all the Sports Illustrated spreads, multi-million-dollar-grossing PPVs and Olympic medals Sasha Banks had on her resume before she got to the WWE.  And who’s more of a worldwide household name than “the girl who’s Snoop Dogg’s cousin”?

You were right in criticizing Ronda’s initial promo, too.  I’m sure those badmouthing Rousey could—on their very first speech in a pro wrestling ring, live, in front of millions watching in the arena and at home—knock it clean out of the park.  Especially reciting a memorized scripted promo rather than speaking in their own words.

“Finn Balor should have won Elimination Chamber then the Universal Championship at Wrestlemania.”

So true. Mr. McMahon is very fond of smaller guys, particularly men in whom he invests a fortune in time and money then get injured right after the Chairman puts the big strap on them.  Why, he even makes them powerless figurehead GMs after they are forced to retire.

Past Classics include all these and MORE…

Search this site…if you dare!